Haphazard by Starlight: Looking Back at the Advent Service 2018 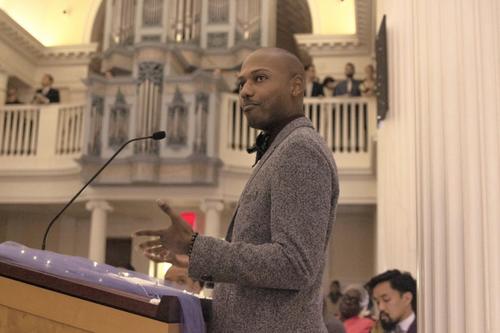 The Advent Service is the largest Marquand Chapel event each year. It marks the end of the fall semester and is followed by a festive celebration. The Advent Service liturgy is highly creative, often drawing in a wide range of contributions from the YDS community. Through scripture, song, spoken word, drama, the visual arts and more, we together anticipate the coming of Christ. Here’s a look back at the 2018 Advent Service: Haphazard by Starlight.

As the Yale Divinity School community gathered in Marquand Chapel for the 2018 Advent Service, Dean Dawn welcomed us to this year’s theme: Haphazard by Starlight. She explained:

“Haphazard by Starlight” is a phrase from U. A. Fanthorpe’s poem BC:AD, in which she reminds us of a time, long before GPS, when people found their way by starlight. She captures that particular mixture of confusion, frustration and excitement that travelers experience when they make slow progress, and keep getting re-routed. Our journey through life is haphazard; its meaning is derived more from the detours into the unexpected than from our carefully-laid plans. But if we learn to follow the signs, we too might find our way—haphazard by starlight—into the kingdom of heaven….

The entire poem can be found here. The assembly was invited to befriend the darkness, and to recognize that in order to see the light, first you have to take a walk in the dark. This image of starlight was the unifying motif of our worship. This theme of starlight was underlined by student Maddie Hill’s recitation (from memory!) of Jacqueline Osherow’s “Space Psalm.” (Listen to Jaqueline Osherow recite her poem here.) Maddie creatively invited the assembly to respond “hallelujah!” in unison after each line, which made her dramatic recitation more participatory.

Ask the average person what is the brightest star in the sky, and they will probably tell you it’s the North Star. In fact, the North Star is notthe brightest—there are 47 other stars brighter than this one. But it is the most important star in the Northern Hemisphere, because the axis of the earth points almost directly at it, and so it never rises or sets, but stays in almost exactly the same spot in the sky, night after night, all the year round, while the other stars circle around it. So it is easy to see why sailors, for countless generations, have used The North Star to find their way through the dark; and why it was the guiding light for the Underground Railroad. As we contemplate this evening the waiting and wondering of Advent, the North Star can remind us that, just as God’s people were guided by starlight in the biblical narratives, we too are never left without a guide, even when we walk through dark days.

Student Geronimo Desumala introduced us to the constellation of Orion, saying:

Orion sits on the equator, so it’s visible in the night sky from all over the world. It’s made up of some of the oldest stars in the universe, and the folklore surrounding this constellation is the oldest we know of: nearly five thousand years ago, the ancient Sumerians called him Gilgamesh—the light of heaven; later the Babylonians called him MULSIPA ZI-AN-NA, the “True Shepherd”; later still the Egyptians named him Sahu, the “father of the gods”. Orion is also named in the oldest of the biblical narratives, where both the prophets and wisdom writers warn their readers that however old Orion may be, the stars are part of God’s created order. To find God, we have to look beyond the stars to the eternal God. As we look at this ancient constellation this evening, let us remember that for five thousand years or more, people have gazed in to the night sky searching for a good shepherd, and a God above all gods—and let us remember the Advent promise that God, who created the night sky, is about to send us a good shepherd.

Student Phoenix Gonzalez introduced us to the constellation Horologium, saying:

18thcentury French astronomer Nicolas de Lacaille, and its Latin name means ‘the clock’. Horologium is in many ways unremarkable: it does not have any bright stars, and there are no myths or ancient legends associated with it. It is just a group of distant stars, hard to see, that were not even noticed until a scientist pointed them out. But maybe it is exactly these features that make Horologium speak volumes to us: for just as Horologium is hard to see, so scientists of our own generation are pointing out that we have taken a long, long time to recognize the impact of modern industry and technology on our planet; and just as Horologium sits like a ticking clock in a quiet corner of the night sky, so time is running out for us to address our planet’s ecological crisis. Some of the damage is already irreversible, but it’s not too late for us to make a change. This clock shaped constellation reminds us that we are called to live in harmony with this good earth today.

For many centuries, the Southern Cross was visible in both the Northern and Southern hemispheres, but through the oscillating movement of the Earth’s axis it gradually shifted out of view from the North, meaning it can only be seen from the Southern sky. If you were under the Southern sky tonight, you would see that the Southern Cross is quite a small constellation—but although it is small, the stars are bright! They stand out prominently in the night sky. The stars that form the Cross are some of the brightest in the Milky Way, and because of this, like the North Star, it’s always been important for navigation. The brightness of the Southern Cross reminds us of Christ—the light of the world. As we prepare for the coming of Christ in the incarnation at Christmas, and as we await Christ’s coming again in glory to restore all things, let us remember that whoever follows Christ will never walk in darkness, but will have the light of life.

Each of these constellations’ introduction was followed by songs, texts, and prayers that echoed these themes of God as our guide in darkness (North Star), God as eternal (Orion), the urgent call for us to live in harmony with creation (Horologium), and Christ as the light of the world (the Southern Cross).