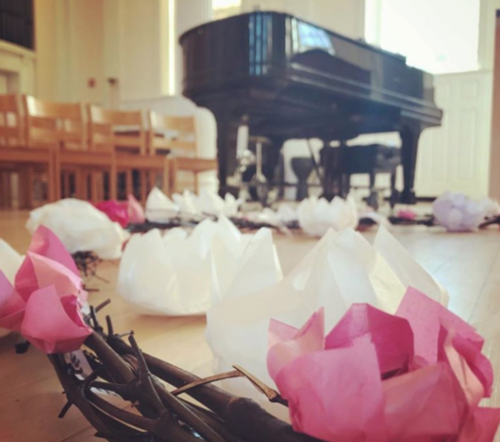 The Spirit helps us in our weakness; for we do not know how to pray as we ought, but that very Spirit intercedes with sighs too deep for words.(Romans 8:26)

“Don’t be fooled into thinking that information leads to transformation. It rarely does.”(Mark Pierson, The Art of Curating Worship)

Many Christian worshipping communities rely on words to facilitate prayer. Sometimes one person speaks prayers on behalf of the congregation, sometimes the assembly speaks their prayer together in unison (for example, when reciting the Lord’s Prayer), and sometimes voices shout out their prayers as led by the Spirit. But spoken word is not the only medium for prayer in corporate worship. Marquand Chapel, like many other communities, has explored the use of prayer stations, which invite an embodiment of prayer beyond one’s voice.

We have discovered some helpful principles for designing and curating prayer stations for corporate worship. These are not absolute rules, rather some practical considerations that we have found to be best practice in our particular Marquand Chapel worshipping community.

Theologian Letty Russell wrote, “the bible is scripture because the bible is also script.” As Russell saw it, the bible serves as a figurative script in a Christian’s life—a set of texts or narratives that help orient one in the world.

For example, in a service on March 26, 2019 entitled “Water from Rock,” we created several prayer stations that drew on images from the narrative of God’s people navigating the wilderness in Exodus:

“The Lord was going before them in a pillar of cloud by day to lead them on the way, and a pillar of fire by night.” (Exodus 13:21) Who are the pillars that have guided you through the wilderness? Write down their names, and clip them to the ribbons adorning our Marquand pillars.

“May my teaching drop like the rain, my speech condense like the dew; like gentle showers on new growth.” (Deut. 32: 2-3) Moses describes God’s Word as raindrops,dew, and gentle showers. Spend some time with a scriptural passage that nourishes you.

Moses cried, “What shall I do with this people? They are almost ready to stoneme.” The Lord said to Moses, “Strike the rock, and a water will come out of it.” (Exodus 17) God transforms something destructive (stones) into a source of new life (a rock that offers water). Take a rock. Feel its weight and texture in your hand. Contemplate what is destructive in your life. When you are ready, let it go, asking God to transform those destructive stones into something new or lifegiving.

On a more practical level, prayer stations sometimes cause anxietybecause the form of prayer is new. Praying with stations requires both active movement, and a certain amount of initiative; it requires more of the worshipper than merely acquiescing in what is said from the front. Worshippers are comfortable with a designated leader speaking prayers on the assembly’s behalf because this form of prayer is familiar, or—if not familiar—at least how they’ve seen prayer done on TV. Incorporating scripture in prayer stations balances the unknown (prayer station form) with the familiar (the bible). Scripture can be a familiar foundation—something one recognizes—that invites one to engage prayer in a new way. We realize, of course, familiarity with the bible will vary person to person. In contexts where a particular passage of scripture is an unfamiliar source, consider reading it earlier in that service so that worshippers will have encountered the passage before engaging prayer station.

Liturgist Mark Pierson warns, “Don’t be fooled into thinking that information leads to transformation. It rarely does.” When inviting the assembly into a new worship practice, less is more. We’ve found a good rule of thumb in Marquand Chapel is to keep instructions under 200 words.

When inviting people to participate in prayer stations, identify where the stations are at and cue them to move that direction. A brief invitation might sound something like this:

Around the chapel there are several prayer stations that take up themes of water and wilderness. At this time, I invite you to stand, go find a station—or several stations—that can be a source of nourishment or renewal for you. Visit one station, or visit them all. Let us pray together.

Around the chapel there are prayer stations that take up themes of water and wilderness:

·       In the chancel you’ll find bibles. Recalling the Song of Moses, which describes God’s word as water, you’re invited to read scripture that nourishes you.

·      Along the North Wall, there are pillars wrapped with ribbon. Remembering God’s guidance of the Israelites with pillars of cloud and fire, you’re invited to name the people who have been like pillars to you—people who have guided you.

·      In the center of the room there is a maze. As an embodiment of wilderness experience, you’re invited to get lost.

·       At the door you’ll find water. Use it to trace a cross on your forehead as a reminder of new life in Christ.

·       Over here, there are stones. You’re invited to hold one and contemplate what’s destructive in your life, praying that in thesame way water burst from the rock for the Israelites, God will bring new life to you.

·       Finally, in the back there are seeds and a map. Using the seeds, you’re invited to mark the place from which you came.

Visit one station, or visit them all. After a few moments of prayer, we’ll regather singing: “Precious, Lord.”

When in doubt, shorter is better. 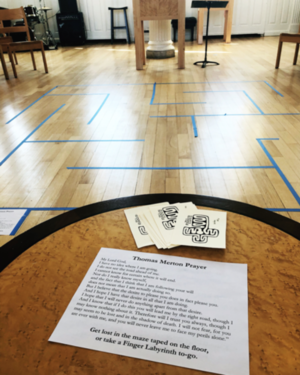 Printed instructions have the added advantage of offering worshipper multiple ways to engage a prayer station. For example, in this Thomas Merton Prayer themed station, worshippers can respond in two different ways—getting lost in the maze taped on the floor or taking a small Finger Labyrinth to-go:

My Lord God, I have no idea where I am going.
I do not see the road ahead of me.
I cannot know for certain where it will end.
Nor do I really know myself,
and the fact that I think that I am following your will
does not mean that I am actually doing so.
But I believe that the desire to please you does in fact please you.
And I hope I have that desire in all that I am doing.
I hope that I will never do anything apart from that desire.
And I know that if I do this you will lead me by the right road,
though I may know nothing about it.
Therefore will I trust you always, though I may seem to be lost and in the shadow of death.
I will not fear, for you are ever with me, and you will never leave me to face my perils alone.”

Get lost in the maze taped on the floor, or take a Finger Labyrinth to-go. 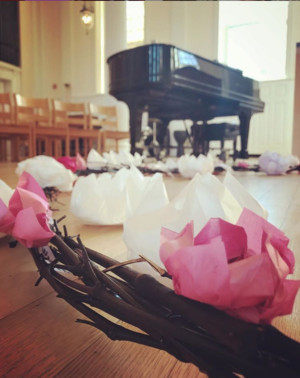 One example of a Marquand Chapel service with a single prayer station was our celebration of Christ the King on Monday, November 27th2017. The students who designed this service created a large-scale crown of thorns from bamboo. The assembly was invited to adorn this large crown with ribbons and origami flowers. Because this single prayer station had several different ways to participate—origami, writing prayers on ribbons, adorning the crown in devotion—the student worship leaders wisely chose to focus on that single prayer station, rather than offer several options throughout the room. When single prayer stations are curated thoughtfully, they often produce a unifying mood in the assembly.