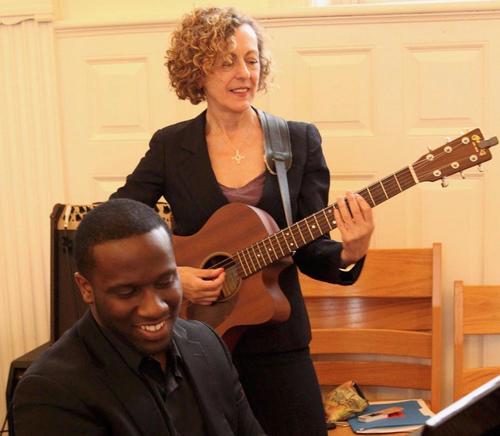 Marquand Chapel introduces unfamiliar music within the context of worship almost daily. The ecumenical nature of Marquand’s worship demands a vast library of musical pieces from countless traditions. The student turnover rate brings a completely blank slate of worshippers at least every three years, and with each new community comes new needs and musical resources. This vastness of traditions combined with the rapid turnover makes Marquand Chapel an ideal case study for thinking through how communities learn new music.

In her discussion on choosing hymns, liturgist and scholar Ruth Duck writes in her book Finding Words for Worship: “Heartfelt participation is possible when the choice of hymns in a service balances familiarity and challenge. New hymns with challenging tunes need careful introduction.” New music is challenging, and a thoughtless introduction of new music often results in requests from a discouraged assembly to never sing that music again. At Marquand, we have noticed several ways worship leaders introduce unfamiliar music while maintaining the assembly’s sense of self-efficacy. Worship leaders in Marquand introduced new music into worship by:

In our highly musically literate and ecumenical context, Marquand frequently introduces music through cold reading. We are lucky enough to have talented music staff to help bolster the congregational voice. Musicians are best utilized not singing from a choir loft for the entire service, but by dispersing themselves among the congregation to help those surrounding them learn a new tune. When choir members sit among the congregation, their voices more clearly communicate new tunes to their pew-neighbors. Confident voices buffer anxieties that come with musical challenges, encouraging the congregation to risk participating fully, rather than shying away from what is unfamiliar.

This strategy sometimes involves more movement throughout the services. If there is a choral anthem or solo piece, singers must to walk back and forth: singing in the amidst to the congregation, moving to join musical ensemble (perhaps in choir loft), then moving back to sing with among the congregation again. While such movement may seem like a distraction, is a small price to pay: when cold reading a piece for the first time, the proximity of strong singers can make or break the assembly’s reception of that new music.

Marquand Chapel leans heavily on this strategy in our Sung Morning Prayer, which are often musically challenging services.

Having a soloist play or sing melody first, then inviting whole congregation to join in.

Performances from soloists or small ensembles can serve two roles at once: they are offerings of praise to God in their own right and, at the same time, covert teaching moments. A soloist playing or singing the melody once through before inviting all to join gives the congregation time to process that new music with their ears before asking them to participate with their voices too. This soloist framing device avoids feeling overly didactic, uniquely holding together worship and teaching in the same moment.

This strategy is a favorite of Mark Miller, director of Marquand’s Gospel and Inspirational Choir. Mark typically invites the rest of the congregation to join in with the choir after a piece has been sung through at least once or twice by the choir alone. A song will first be sung by a soloist, then by the whole choir with harmonies, and only after the choir has repeated the song (often several times) will the entire assembly be invited to join.

Instrumental solos can function as a special (often longer) introduction to a piece that establishes the melody before congregational singing. Instrumental introductions, as opposed to vocal introductions with sung text, allow listeners to focus exclusively on the tune without the added element of text. This makes instrumentalists especially helpful in rhythmically challenging pieces. For example, in Marquand Chapel the melody to “Holy is Your Name,” a setting of a traditional Irish tune with irregular and syncopated rhythms, is sometimes played on a penny whistle once through before the congregation joined in.

Having a song leader teach a song line by line, and inviting assembly to echo back each phrase.

Of all the methods, this one is perhaps the most didactic in tone. It is especially effective for introducing cyclical music—songs with short repetitive phrases, such as Taize’s music or paperless songs from our friends at Music that Makes Community. A song leader might sing one musical phrase at a time, inviting the assembly to echo after each phrase. If there are layered parts, the song leader might teach each part separately. After each part has been introduced, the individuals in the congregation can choose whichever part they are most comfortable with. When teaching line by line, it is important to have competent song leaders who are comfortable gesturing with their body to indicate when the congregation should listen or echo back.

Especially challenging music needs repetition. Songs should not be avoided just because the assembly does not get it after hearing a soloist sing it first or after being taught it line by line. Rather, challenging music demands liturgists carve out the time for repetition until something clicks.

Such repetition can happen within the scope of a single service or over longer period of time. If a piece is challenging, but short in length, it is possible to repeat it several times in the same service. The same song might be a response to each reading, frame the sermon, or be introduced at the beginning of a worship service in preparation to be sung later in that same service. The assembly might not quite grasp the piece the first time, but will certainly become more confident after singing it two or three more times. While repeating the same song several times in one service might sound tedious, the congregation will sense when they start to get the hang of it, and such growth is encouraging! Repetition allows worship leaders to introduce the community to something new and challenging while also ensuring that worshippers leave the space on a good note, rather than feeling discouraged.

Repetition might also extend over the course of a season or even entire year. This strategy is particularly useful when incorporating new genres into worship. When Marquand began expanding into Praise and Worship style music, we curated a more focused repertoire instead of singing new pieces each time. Repetition of the same songs throughout the year allowed people to slowly become familiar with each piece. Along the way, worshippers were reminded it was okay to participate in worship simply by listening and join in whenever they felt comfortable. Eventually, the entire assembly learned these songs. New music was introduced alongside more familiar works to balance out the feeling of unfamiliarity.

This strategy is best used in combination with at least one of the strategies above: strategic placement of strong singers, solo performance first, or line-by-line teaching.

Inviting the congregation to sing only part of a song, such as during a refrain.

Marquand’s Gospel and Inspirational Ensemble often invites the congregation to join in on just the chorus of a piece while the choir sings the verses.

Another example of this strategy: sung prayers in which the assembly is invited to sing a simple refrain after a leader sings each petition, such as Ben Allaway’s “I Will Provide Your Need” prayer setting. While the petitions change both in text and tune, the congregational refrain is constant, thus very achievable. After a few repetitions, the song leader may invite the congregation to sing improvised harmonies, creating space for musical variation.

Encouraging the assembly to clap, play instruments, or move bodies by standing or dancing. Singing along is not always necessary to participate fully in worship.

Participation does not always mean singing along. Worshippers may participate musically through clapping, as often the case in gospel style music. During Marquand’s Mardi Gras celebrations, individuals are invited to play small percussion instruments: egg shakers, miniature tambourines, and finger cymbals. Several worshippers even dance! Eucharistic services often feature a choir piece while the rest of the community receives communion. While inviting participation is an essential aspect of good hospitality in worship, it is also important to teach that participation may be held very broadly.